Zac Efron haircut has probably as many fans as the celebrity himself. No matter what style Zac chooses, his hair always looks stunning. We’ve lost count of the hair trends he has set. If you’re into Efron’s hairstyle or simply looking for some inspiration, take a glance at the best ideas we’ve picked out for you.

Not so long ago, the actor updated his haircut, which made the whole world gasp in awe. New Zac Efron short hair cut is basically a messy Ivy League. Even though the strands are tousled, the overall appearance still remains pretty neat. So, he chooses to complement the look with a short scruff.

In Baywatch, Zac Efron long hair was styled slicked back, which allowed his facial features to stand out even more. Since he was supposed to spend quite a lot of time at the beach, the tips of his locks were highlighted. And to keep the focus on Zac Efron blond hair, it was enhanced with an undercut haircut on the sides. 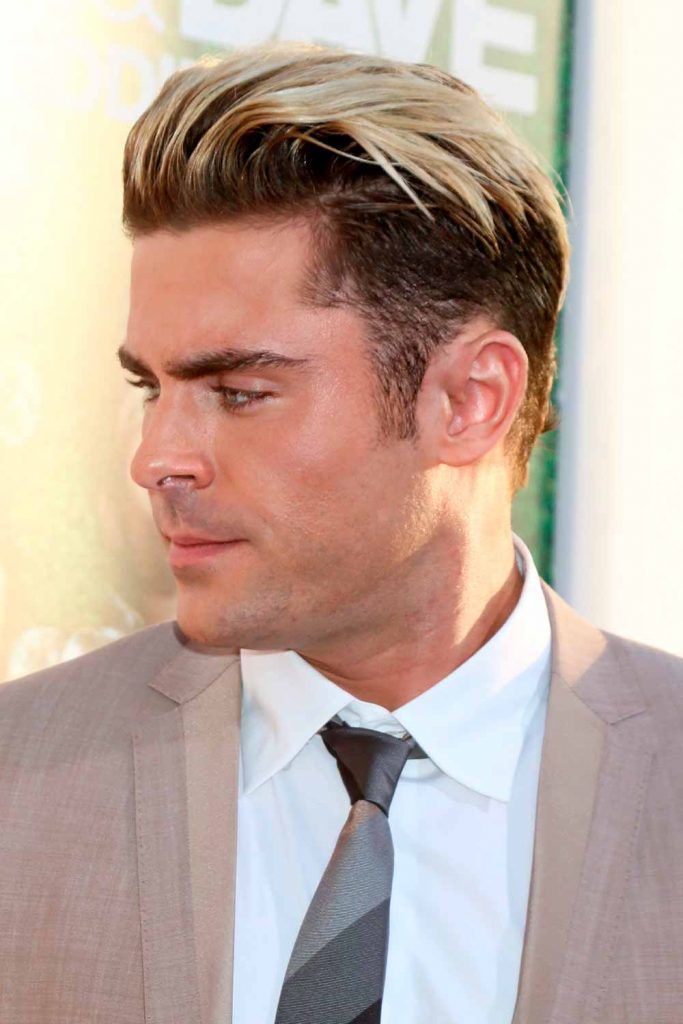 Zac Efron is one of those guys who look amazing regardless of what hair color they have. Thus, to add contrast to his appearance, Zac decides to bleach his locks. However, he does not go all-out blonde. The roots remain of his natural color, which adds depth and dimension to his hair. 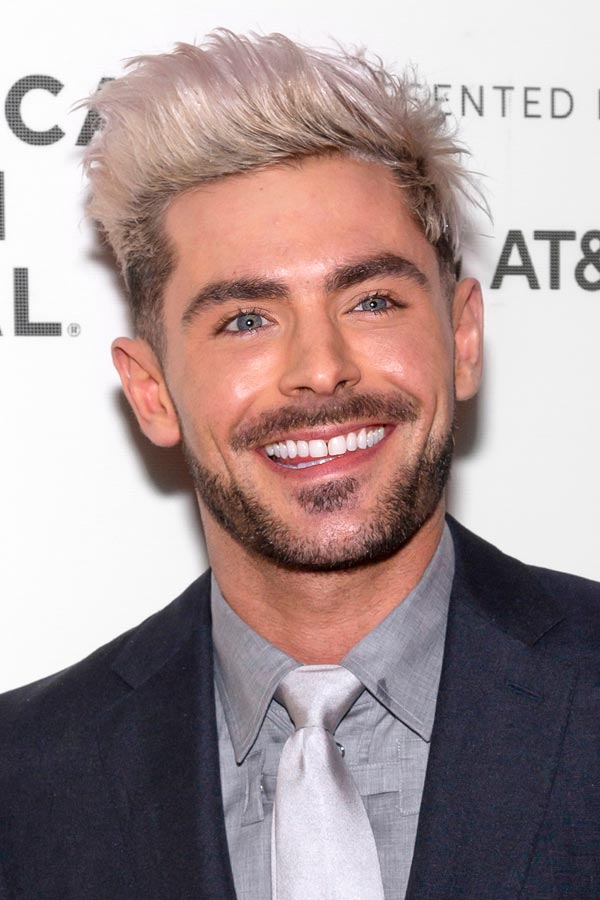 Save to
Source: Ovidiu Hrubaru/Shutterstock
The Editor's Choice

Often, curly hair men find their hair texture difficult to tame, and that’s when mens medium hairstyles come into play. They allow showing off the defined hair structure without additional effort. Zac Efron’s side parted curly hairstyle is a good case in point.

The diversity of Zac Efron hairstyles really impresses. As late as yesterday, he sported all messy and textured spikes on the beach, whereas today, he flaunts perfectly slicked back hairstyle on the Red Carpet. What a makeover! And back to the dapper elegance. 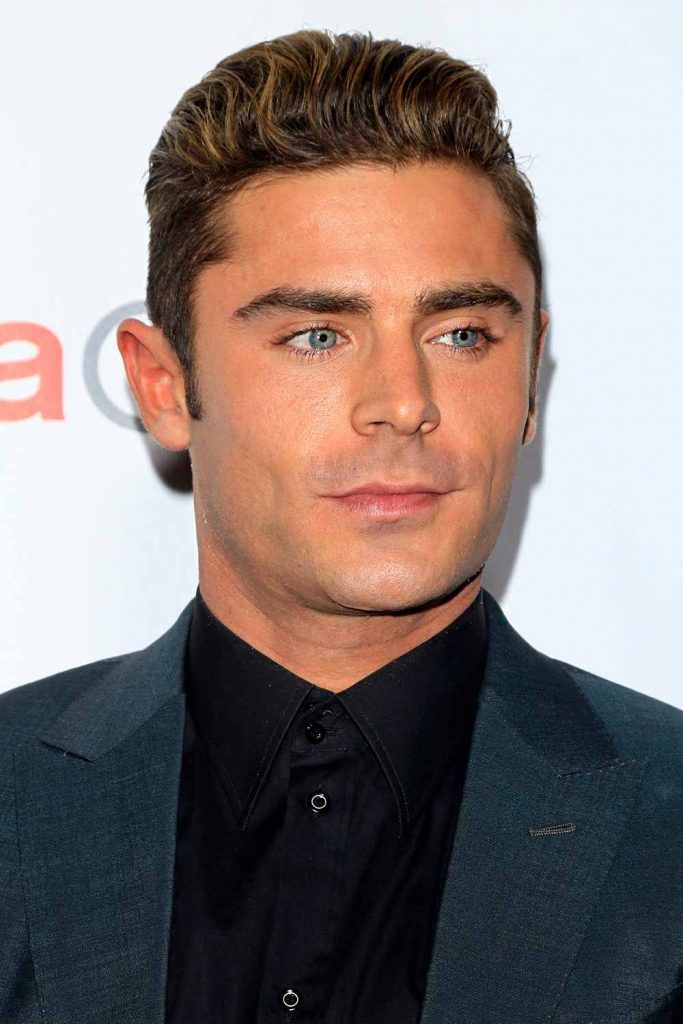 Spiky hair is a real staple of the coolest Zac Efron’s male haircuts. The hair is again cut medium length with shorter sides and longer top for added contrast. The front section is pushed together and the crown is spiked up. Altogether, it creates a sharp and daring look. 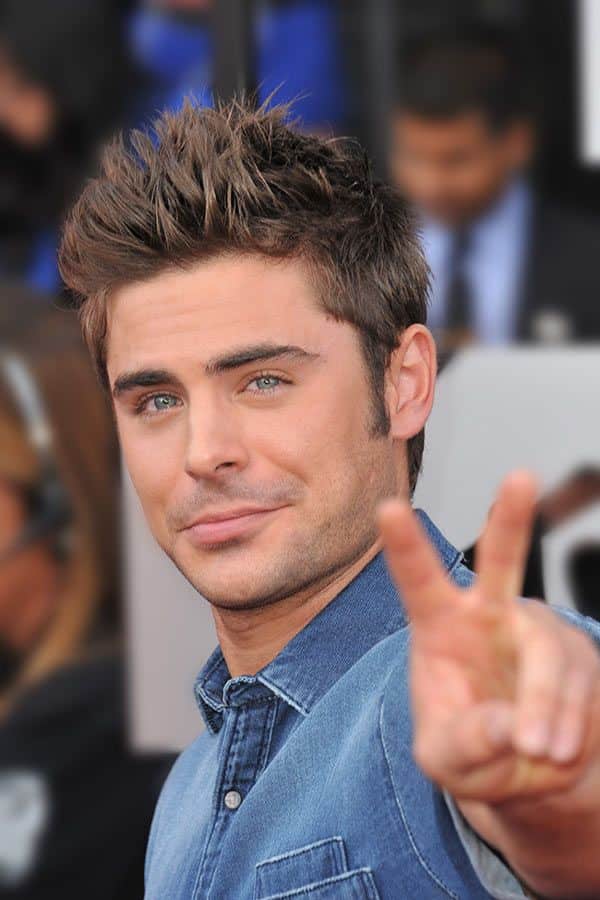 A quiff may be considered Zac’s signature hairstyle, as hardly anyone can pull it off as cool as him. The actor often wears his quiff pushed up to the center so that it creates a dapper flick. For an added structure and dimension, he paints highlights in his tresses in a warm caramel shade. 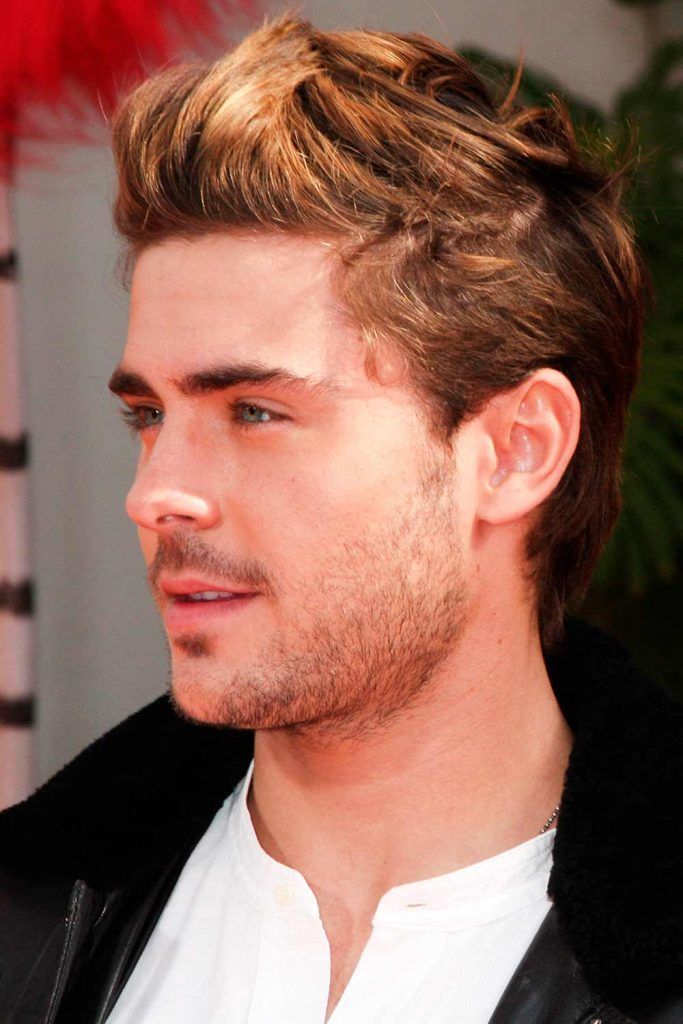 Obviously, Zac Efron often attends the events when his hair needs to look elegant and sophisticated. One of the most flattering styles that Zac frequently flaunts on the Red Carpet is a slick side part cut. With it, his locks look polished and glossy, which makes the celebrity camera-ready right away. 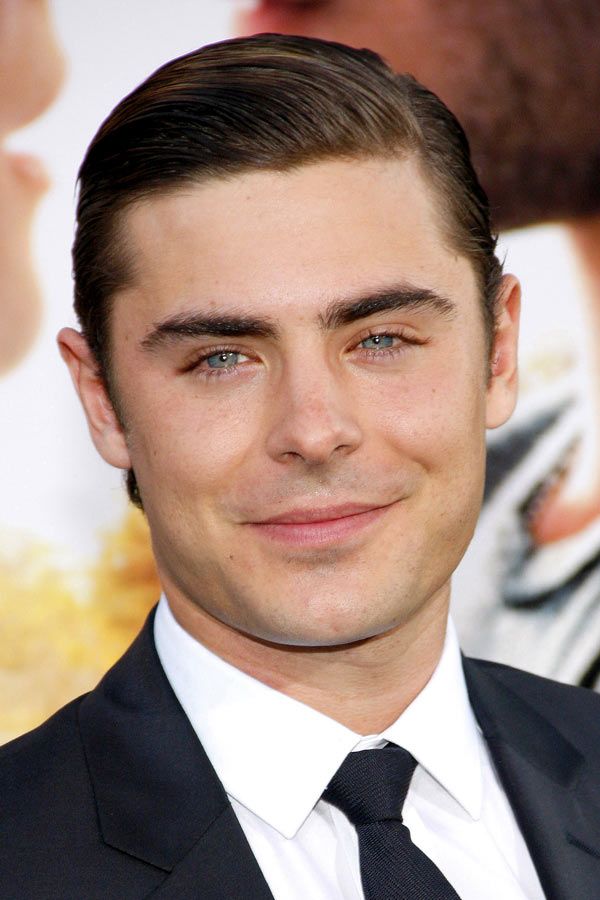 Save to
Source: Tinseltown/Shutterstock

When Zac Efron recalls that in addition to acting, he’s also a talented singer, he styles his hair in a textured Fawk hawk like a real rockstar. His secret though is that his every men hairstyle can be easily transformed into another one. Thus, a polished pompadour becomes a faux Mohawk without a hitch. 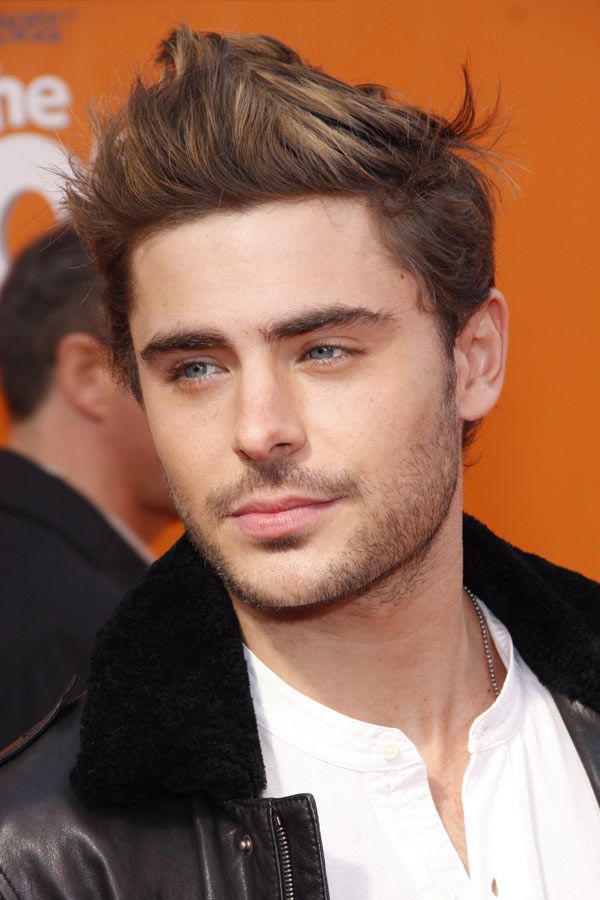 That said, Zac Efron pulls off messy medium length hairstyles like no other. They’re highly beneficial not only because of the careless and breezy appearance, but also thanks to the effortless styling and low maintenance. 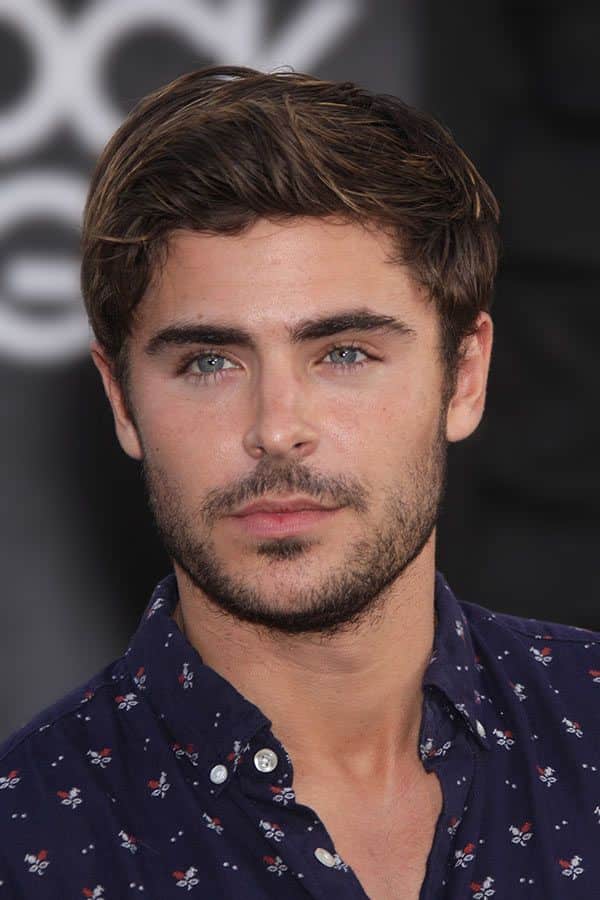 The buzz cut isn’t for everybody, obviously. This bold and intrepid style will suit those guys who choose to show off their virility and sharp facial features. Of course, Zac Efron is one of them. 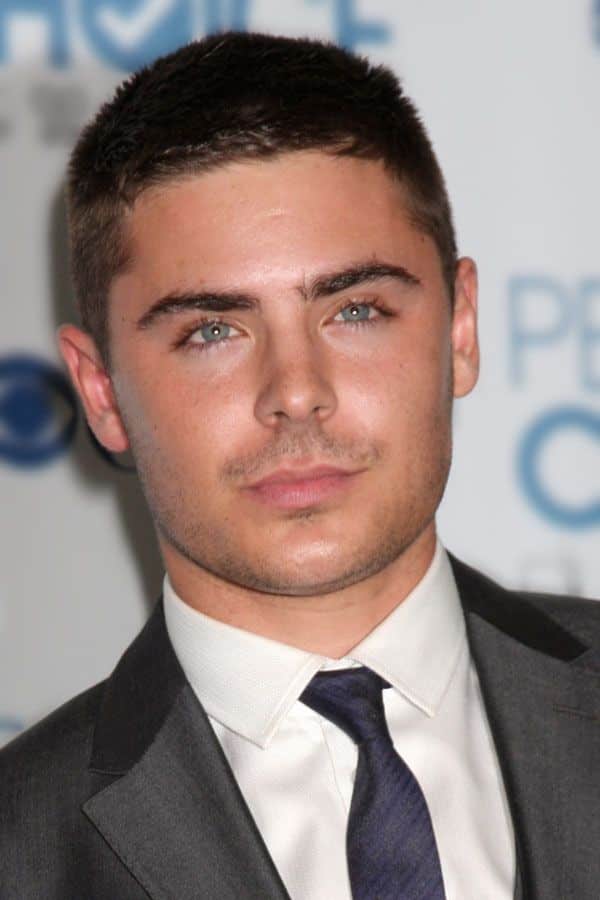 Save to
Kathy Hutchins/Shutterstock
The Editor's Choice

The quiff is one of those mens hairstyles that have stood the test of time and adjusted to current trends. Zac Efron’s curly quiff with its unusual flick can certainly pass for such a modernized version. 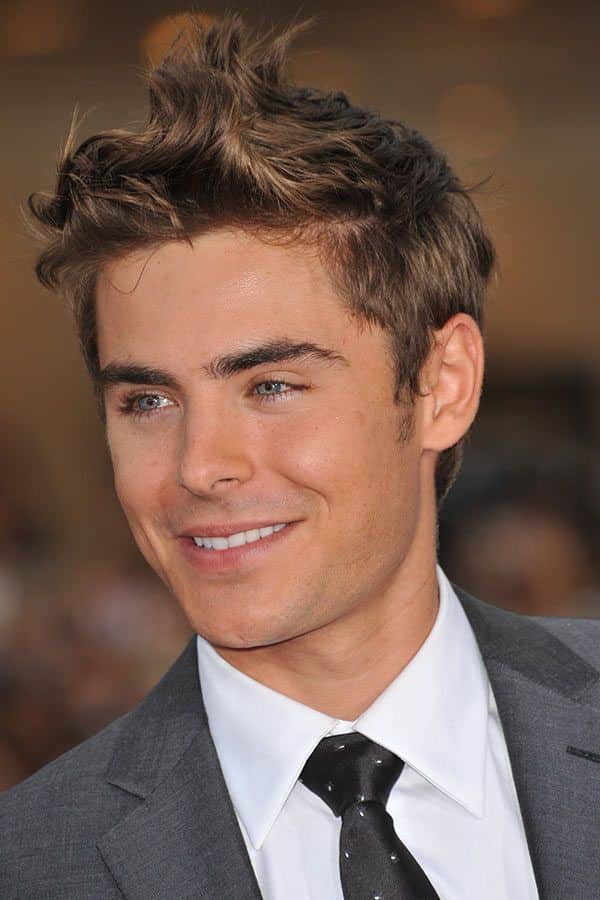 Another awesome way to flaunt long bangs is to sweep them to the side. Not only does this hairstyle look trendy and modern, but it is also suitable for any ambiance, from a barbecue weekend with neighbors to a Red Carper event. 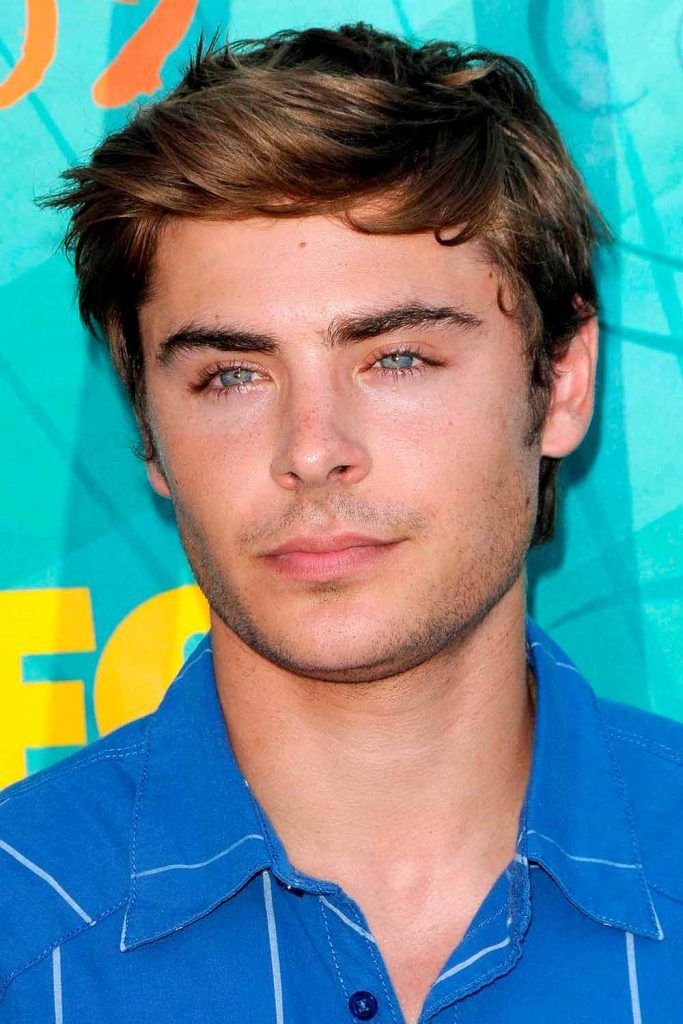 The actor manages to give a classic medium bowl haircut his signature twist by opting for flipped ends and pushed to the side bangs. In this way, his hair looks stylish and intricate instead of old-school. Besides, those careless strands falling over his forehead make us stand in awe. 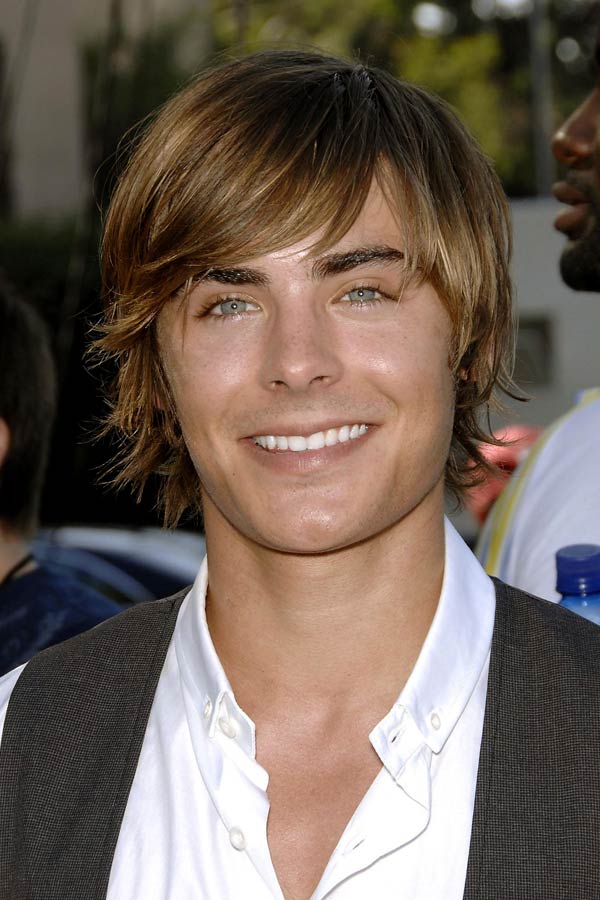 Save to
Source: Everett Collection/Shutterstock
The Editor's Choice

Zac had rocked mid length hair styled in beachy waves long before he even dreamed of starring in Baywatch. To create such a relaxed impression of the look, Efron goes for a layered haircut that perfectly frames his face. 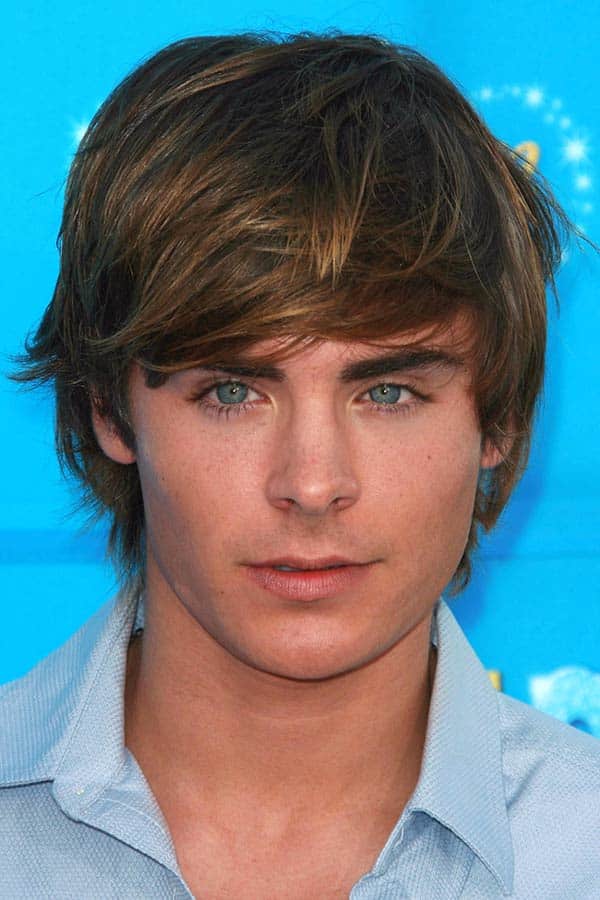 Undoubtedly, Zac looks absolutely amazing with any hair color and style. But dark brown locks look especially flattering on him, as they make his ocean blue eyes pop even more. To give his hair a body and definition, he opts for a layered medium-length cut. 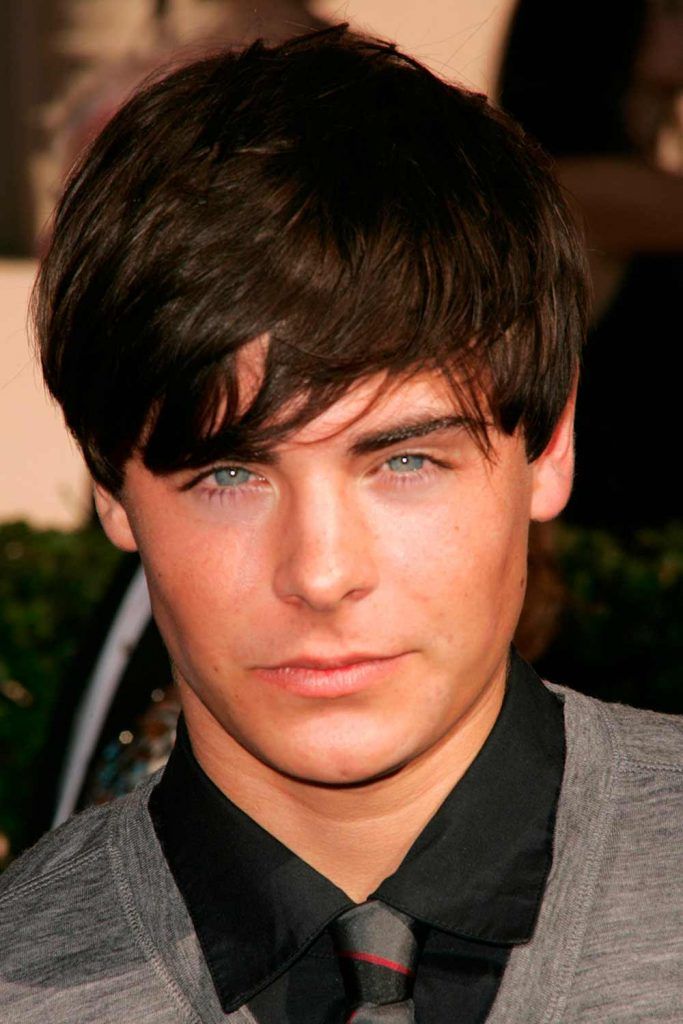 How To Get Zac Efron Haircut 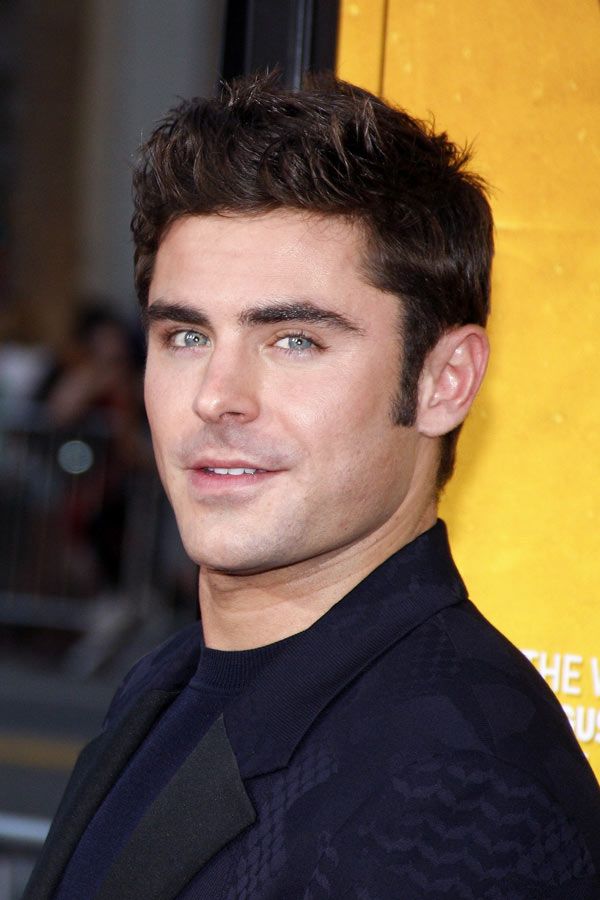 Zac Efron hair not only keeps in pace with the latest tonsorial fashion, but it’s also often ahead of time. Although his hair is impressively thick and his facial features are unbelievably attractive, it’s not necessary to win the genetic lottery to sport one of Zac Efron haircut styles. Their broad versatility, ranging from a manly ultra-short buzz cut to romantic beachy waves, allows you to find the hairstyle that will suit your face shape and hair type flawlessly. 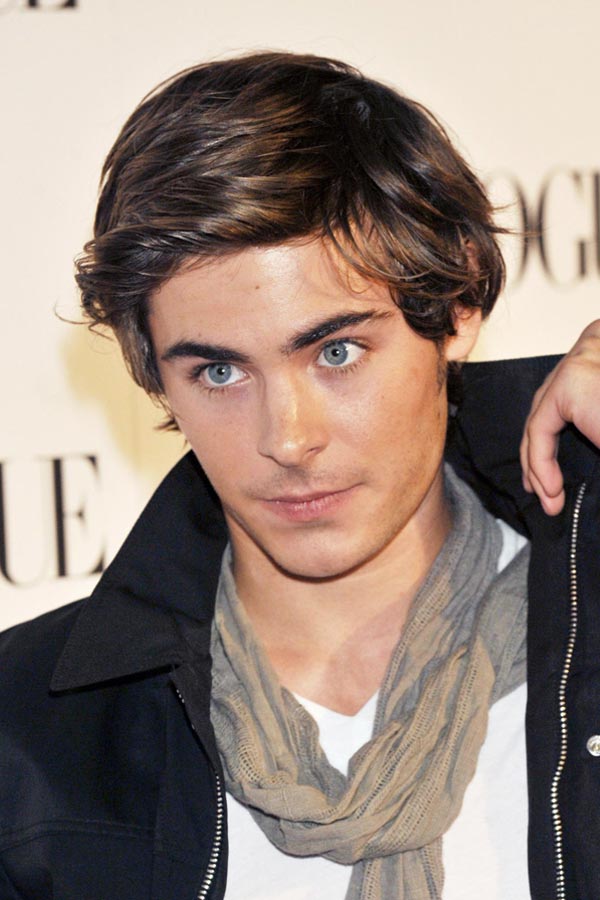 Save to
Source: Everett Collection/Shutterstock

If you cannot enlist the help of a celebrity groom squad to do your hair like Zac Efron’s, it does not mean you will not be able to pull off one of his looks. You just need to find a skillful barber in your neighborhood and your hair will surely look as good as Zac’s if not better. Just take a photo of the desired hairstyle with you and you are guaranteed success.

It’s definitely worth having at least one of Zac Efron haircut styles in your personal look book. No matter your hair type or personal taste, there’s always a hairstyle to match your preferences. All you need to do is to pick out a cut and arrange an appointment with your barber.

What is Zac Efron’s haircut called?

Although Zac Efron had often been seen with pretty long hairstyles, his locks have had a dramatic upgrade recently. The actor has clipped his mane short to a low-key, manly hairstyle, a crew cut, which perfectly shows off his sharp and virile facial features.

What haircut Does Zac Efron have in Baywatch?

If you have watched the Baywatch reboot, then Matt Brody’s hairstyle, who was brilliantly performed by Zac Efron, could not have gone unnoticed by you. The actor had a really bold and edgy look with a trendy disconnected undercut. The achieve it, the mid-length, thick hair on top should be combed back, which creates a fashionable and refined appearance.

How do you get your hair like Zac Efron in Baywatch?