No matter if you’re a soccer fan or not, you’ve almost certainly heard of Cristiano Ronaldo haircut. This football player has been popular with the crowds not only for his skillful performance on the field but also for his outstanding hairstyle. And even though his gameplay will be most likely appreciated only by true football connoisseurs, the way CR7 styles his hair is definitely worth everyone’s attention. For this very reason, we’ve picked out the most prominent Ronaldo’s haircuts to inspire your next look.

In October 2021, Ronaldo introduced to the world a rather short haircut, compared to other Cristiano Ronaldo hairstyles, of course. A crew cut fade that the Portuguese striker is sporting looks stylish and fashionable. Besides, it is low maintenance and practical, which is what you usually look for in a perfect sports haircut.

Believe it or not, but a man ponytail is also recorded into Cristiano’s hairstyle look book. Although it is not as prominent and abundant as you would expect it to be, it still has the right to exist. Yet, it looks like the soccer legend simply took away his overgrown top from the face so that it would not impede his vision. Nevertheless, the undercut sides give the look a stylish and dapper appearance. 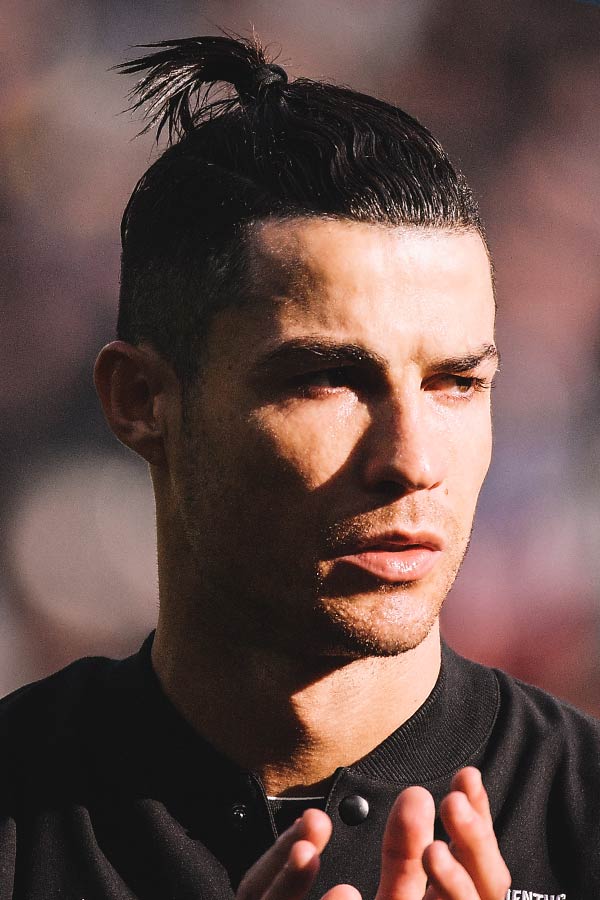 Even though the pompadour haircut was initially worn be women, many men have proved it to be a true virile style. Cristiano Ronaldo haircut features a short pomp combed over to one side and separated from the sides with a hard part haircut. Product-wise, Cristiano opts for a hair gel, and he doesn’t skimp on it for sure. This ‘do is no exception. 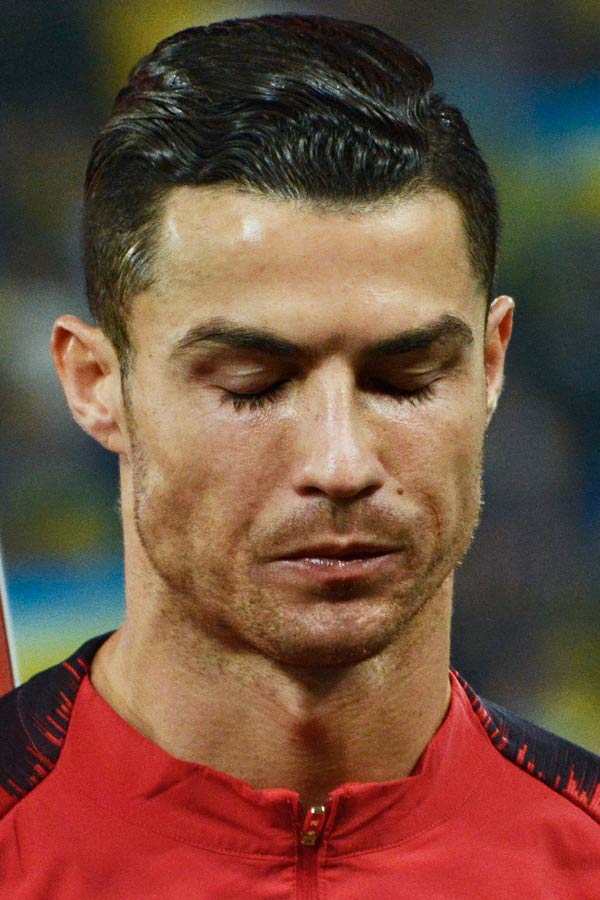 Modern haircuts for men teach us to make the most out of our natural features. If you have curly and thick thatch like Cristiano’s, you may simply style it high and tight fade by raking your fingers through the top using a bead of a hair product. It’s easy, stylish and elegant at the same time. 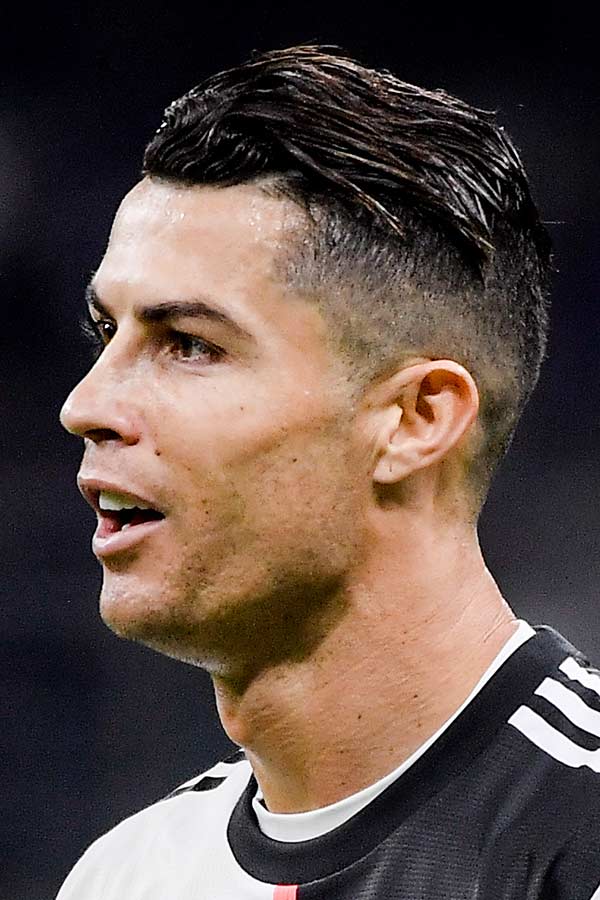 Save to
FTPhoto/Shutterstock
The Editor's Choice

Going classic is never a miss. Polished and neat comb over allows you to sport it during the most intense football matches without worrying about your look. What helps men’s short haircuts to sit flawlessly is a sheer amount of a stronghold gel. 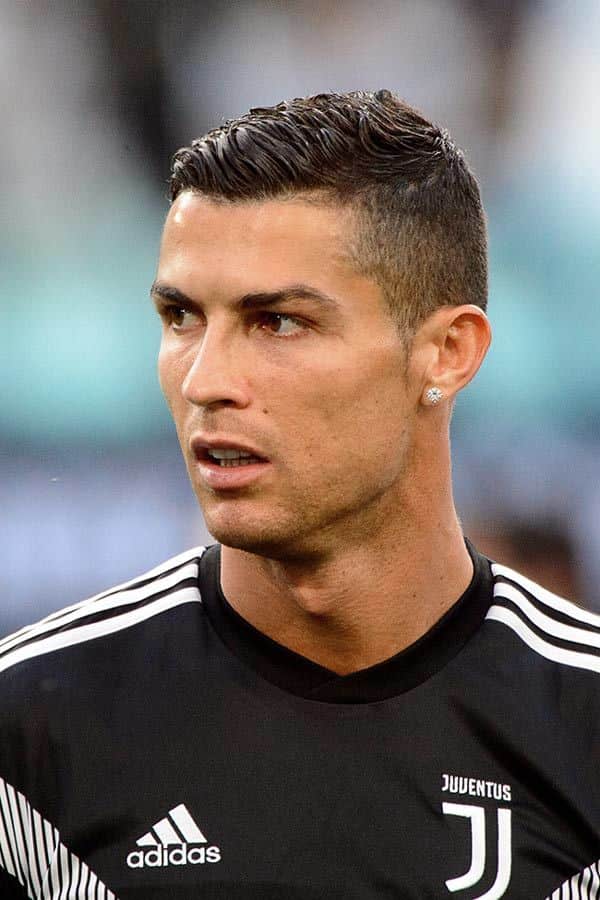 If you do not know what to do with a quiff, look at Ronaldo. He seems to have tried every quiff style existing. To achieve a sophisticated and polished look, slick the quiff back using a generous amount of a hair styling product with a strong hold and wet finish. Pay attention to how the faded sides help to keep the focus on the refined top. 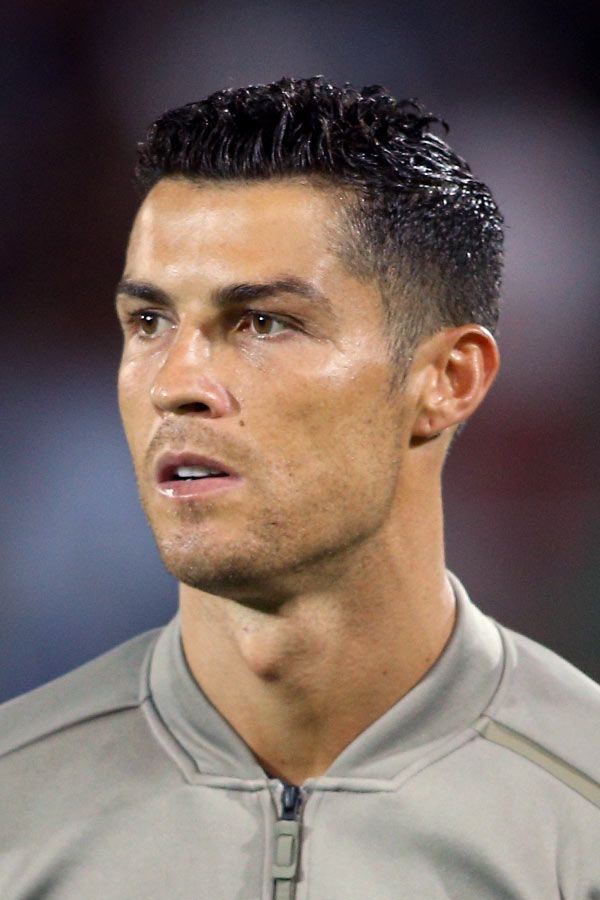 Save to
Marco Iacobucci Epp/Shutterstock

With an Ivy League haircut, it’s hard to tell whether you’re looking at the sports celebrity or a Harvard student. Such short hair cuts combine trimmed sides with a longer top combed over to either side. A side part is as important for this cut as a football for the game. 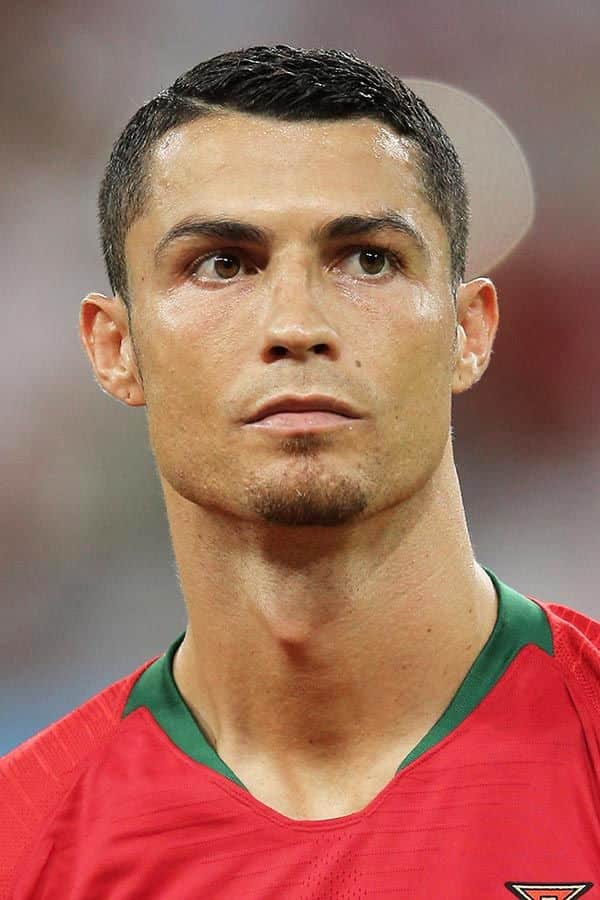 Save to
Marco Iacobucci EPP/Shutterstock
The Editor's Choice

From time to time, Ronny plays around not only with medium haircuts for men and their styling but also with coloring. Cristiano likes to add golden highlights to the top section of his hair for added volume and depth, which looks incredibly complimentary on wavy hair men. 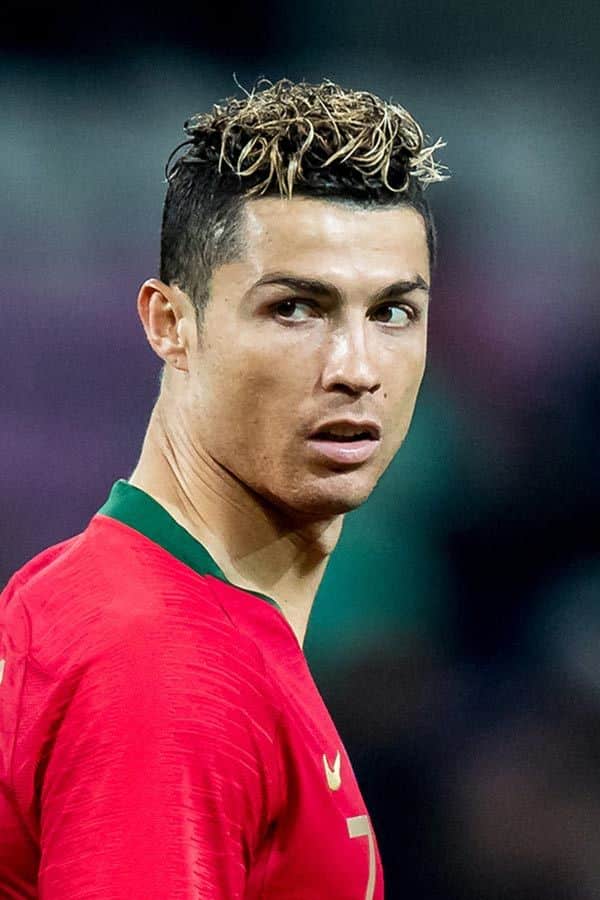 Football stars, like any other celebrities, also often attend formal events. The slick back hairstyle gives a neat and clean appearance that perfectly suits the formal ambiance. To embellish the look with his personal signature, Cristiano adds golden highlights to the top. Sleek and brushed back haircut styles for men are unimaginable without a generous amount of a styling product. In our case, gel, of course. 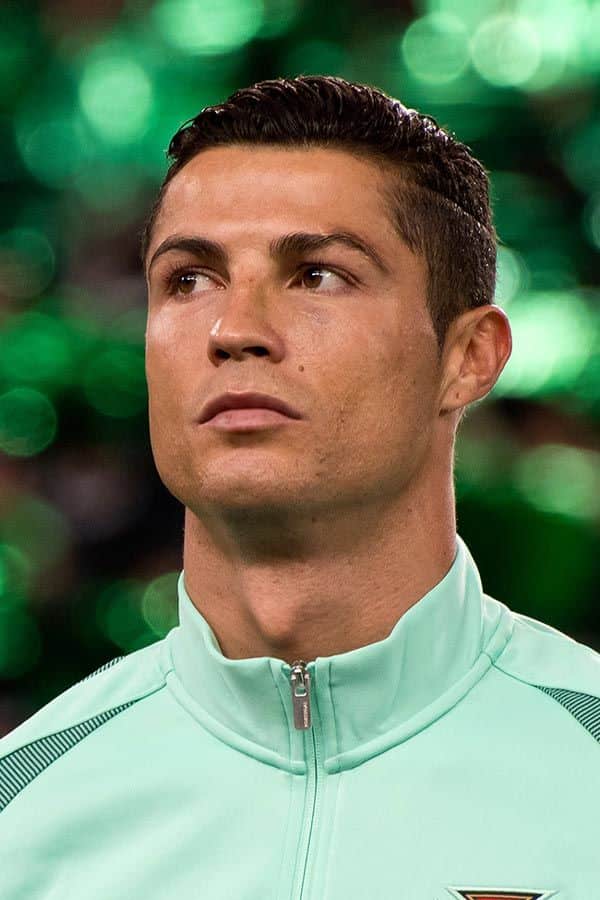 Not all Ronaldo’s men haircuts are medium in length with an extensive top. Sometimes, he chops all his locks off, sporting a classic military buzz cut. However, as he always adjusts the hairstyles to his individual style, the top is cut a couple of inches longer than the rest of the hair and a shaved in line is added to one side, which creates additional contrast. 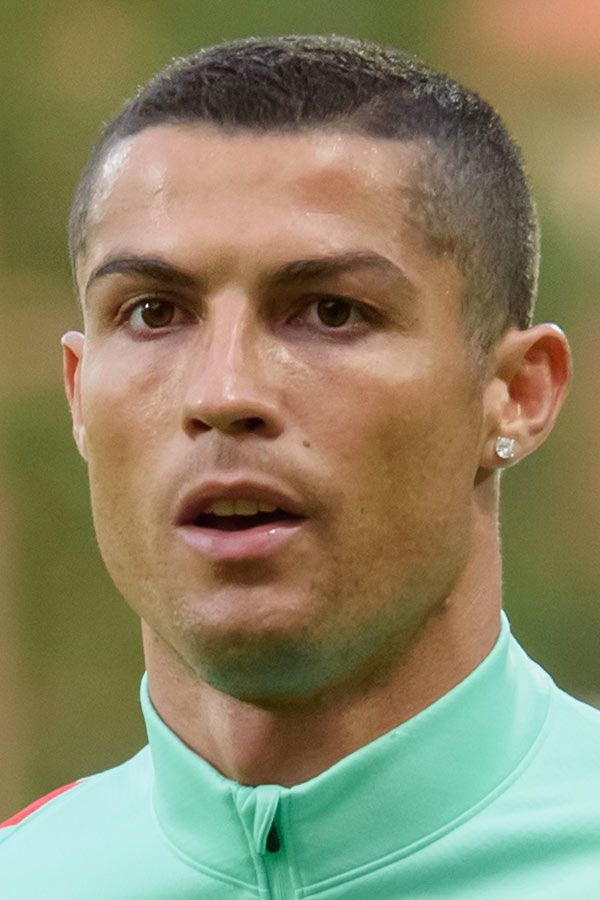 Spiky hair can make you look a lot younger, which CR7 successfully exposes. This hairstyle is also a great option for guys with round face shape, as thanks to the high top, it visually elongates the face. To keep all the attention on the spiky top, buzz the sides and back very shortly. 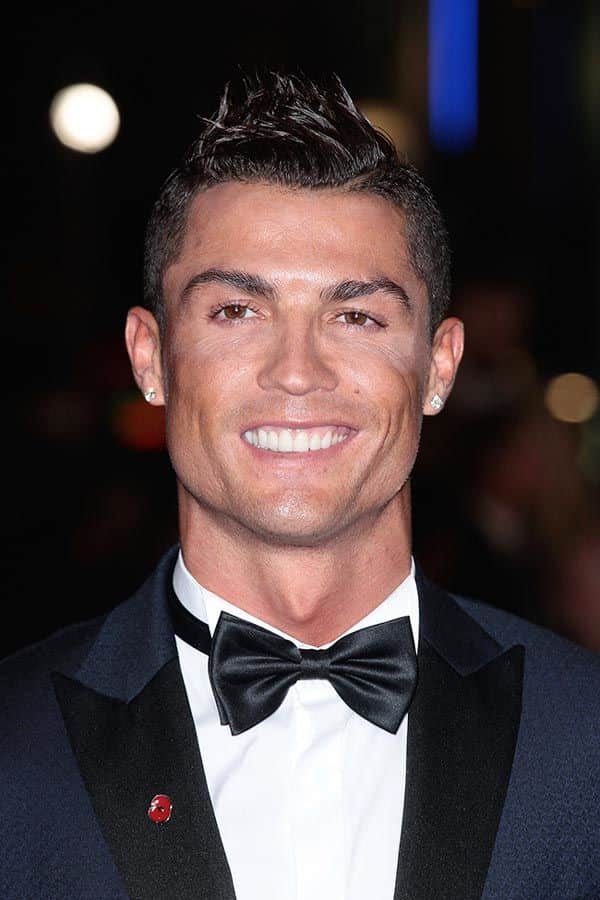 This is a bolder version of a faux hawk haircut. It features an undercut and a hard part on each side of the head. The top is pushed back and secured with a hair gel for a textured and refined look. 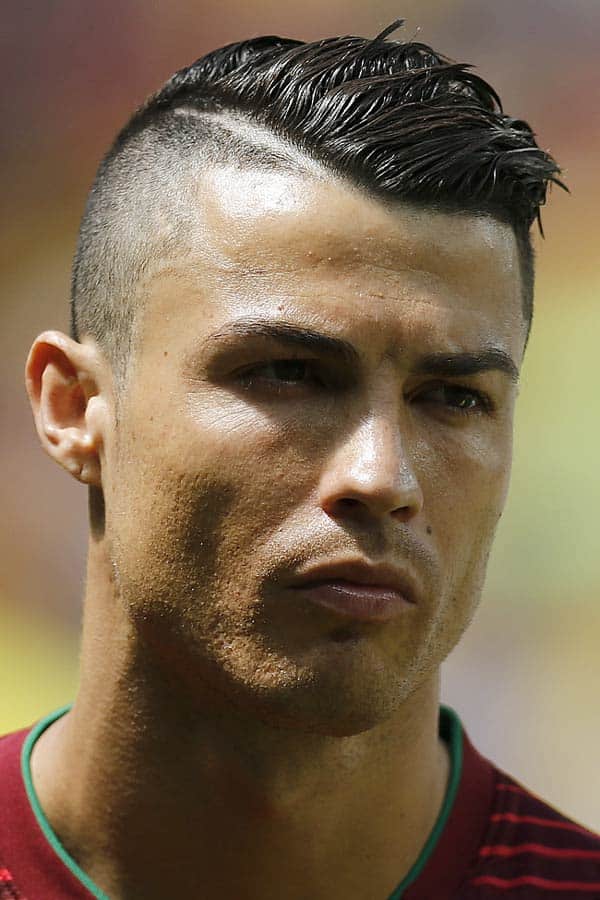 Save to
AGIF/Shutterstock
The Editor's Choice

Arguably, nobody knows more ways of styling spiky hair than Cristiano does. This time he goes for long unkempt spikes on top. To achieve messy hairstyles men with naturally curly and spiky locks like Ronaldo’s should simply gel them and let dry tousled. To make the top a focal point of the look, you can pair it with a disconnected undercut. 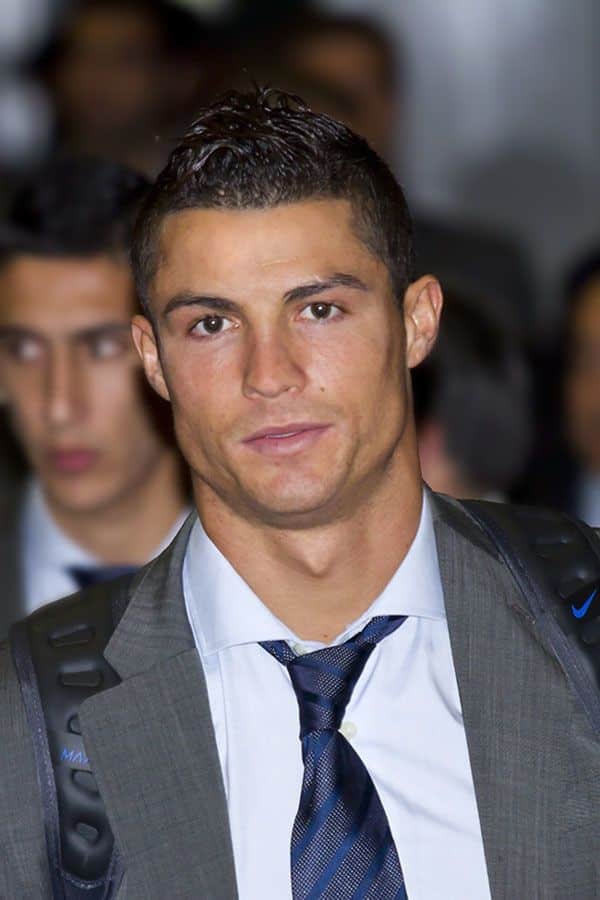 Ronaldo often plays around with a Mohawk. However, he never goes after a traditional one, sporting its different variations instead. Here, he has a high top molded up into a point and set with a dime-sized amount of a styling product. The sides are given a high tapered men’s haircut, which helps to draw attention to the hawk. 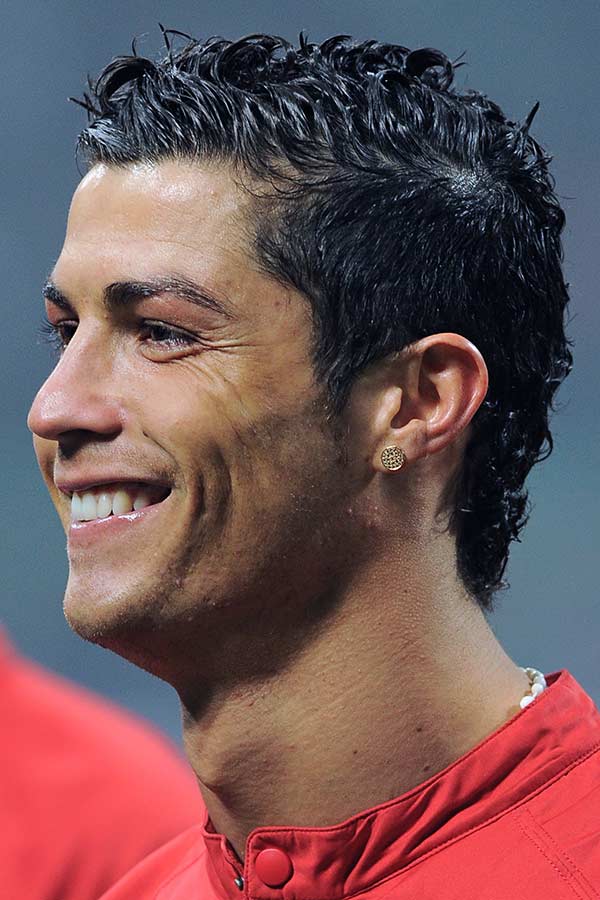 When his short haircut starts to grow out, CH7 immediately go for styling it. The short spiky top looks boyish and super cool paired with trimmed sides and back. This hairstyle is great for any occasion, from a Red Carpet event to a workout in the gym. Don’t forget about the portion of the product for extra texture and hold. 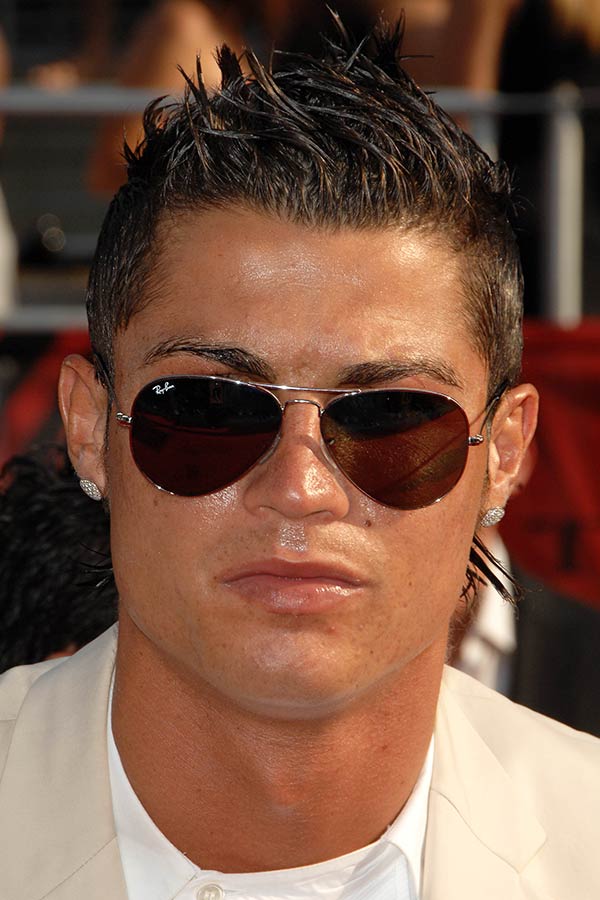 Save to
s_bukley/Shutterstock
The Editor's Choice

Ronaldo often sports his hair messy for good reason. Such a hairstyle is much easier to maintain when running 90 minutes on the football field. To give it a sophisticated touch, the football player styles his locks side-swept. Thanks to the heavy layering, it effortlessly looks multidimensional and ample. 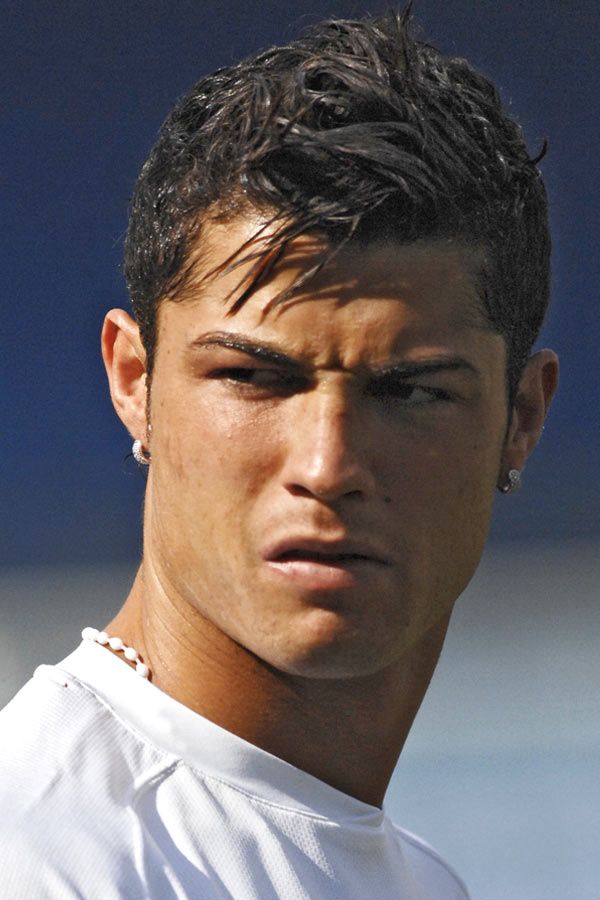 What is Ronaldo’s haircut called?

Ronaldo often chooses to rock his hair either short or medium long. The common feature of all his styles though is how the hair bends. Yet, you can say pretty confidently that a spiky fauxhawk is his signature look.

Who is Ronaldo’s barber?

Cristiano Ronaldo hair was entrusted to celebrity hairstylist Ricardo Marques Ferreira. As they collaborated for many years together, he was often referred to as “Ronaldo’s hairdresser.”

Why did Ronaldo get that haircut?

Like the majority of Ronaldo hairstyles, that specific haircut was not only a fashion statement and a way to stand out in the crowd, but it also allowed the soccer star to draw away the attention of the media as well as funs from other issues, such as injuries, etc.

What does Ronaldo use in his hair?

For styling, CR7 is known to use pretty much hair gel or water-based pomade, such as Suavecito, which gives his locks a glossy finish and ensures they will stay in place during a 90 minute football match. Being the brand’s ambassador, the football star claims to use Clear shampoo to keep his hair clean and dandruff free.

How do you do a Ronaldo haircut?

Here’s a quick tutorial on the new Ronaldo’s hairstyle:

His most iconic hairstyle features a comb over on the top and an undercut or fade on the back and sides. However, because the top is elongated, it allows the soccer superstar to easily transform it into a spiked up or slicked back look.

Draw inspiration for a new haircut from a celebrity’s look is always a smart move. Especially, when it concerns such a known for his outstanding hairstyles football star Cristiano Ronaldo. We handpicked his most attractive and popular ‘dos, which won’t take you long to recreate.