Match Your Tastes With One Of The Most Savage Viking Hairstyles

Even though Viking men lived many years ago, their hairstyle still remains one of the most intriguing. Our brain thinking about the Viking pictures ruthless warriors that make our hearts race. However, their vicious and masculine haircuts aren’t for everyone. Only for those champs who feel brave enough to pull them off. To give you odds, we’ve compiled the best ideas for Viking hairstyles. Would you dare? 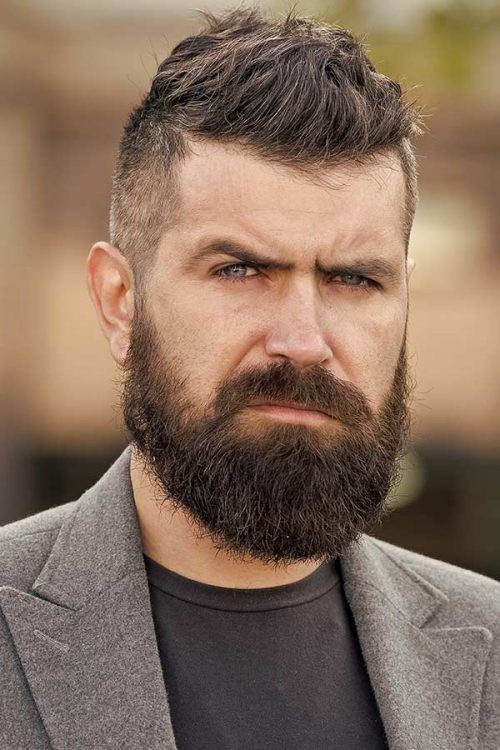 If you don’t feel like giving all of yourself to the Viking haircut, start with something rather moderate. A crew cut will do. It’s so easy to maintain that you’ll soon become ready for something more elaborate. Note though that a coarse full beard is mandatory in this case. As a defining element, you can mix it all with an undercut.

Q: What is the Viking haircut called?

A: In a traditional Viking haircut, the hair on the top of the head is long and thick while the sides are shaved. A full beard, which usually accompanies Viking hairstyles, is long and coarse. This gives your appearance a mighty and virile look. 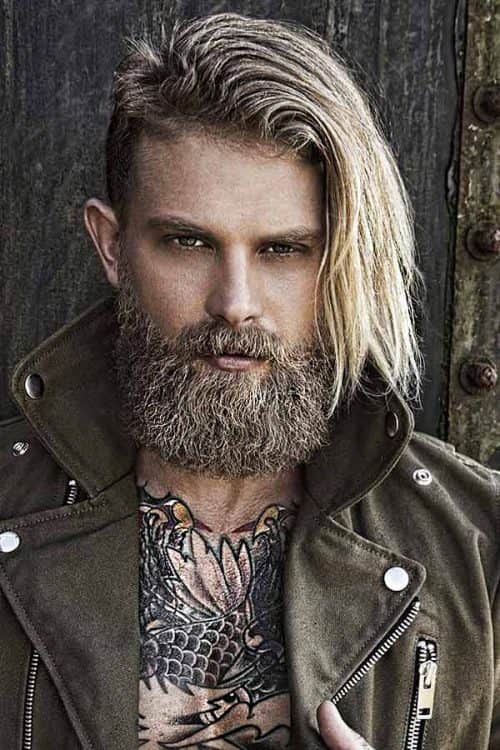 Talking about the undercut, this hairstyle would be very appreciated by lads as it combines two popular styles, Viking and hipster. When opting for an undercut men often prefer to pair it with many different hairstyles. You can successfully sport it with a ponytail, top knot, Viking braid or slick back to create even a more contrasty look. 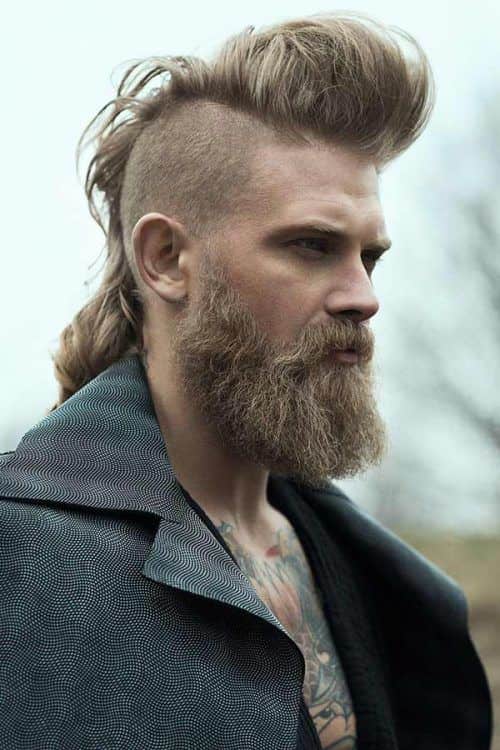 Another way to achieve contrast is the Viking Mohawk. Although the Norsemen used to style it differently than the modern punks, the Mohawk haircut is definitely what these two groups have in common. To get the look, you should have your sides shaved while the hair on top and back should be grown out long. 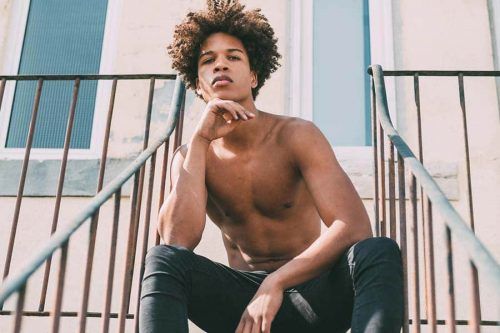 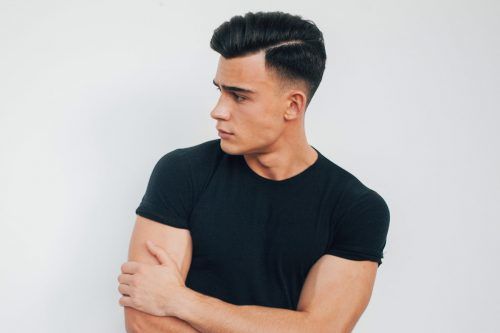 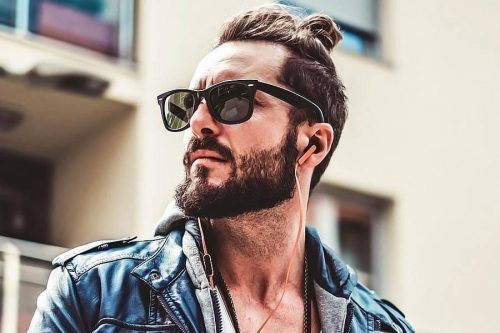 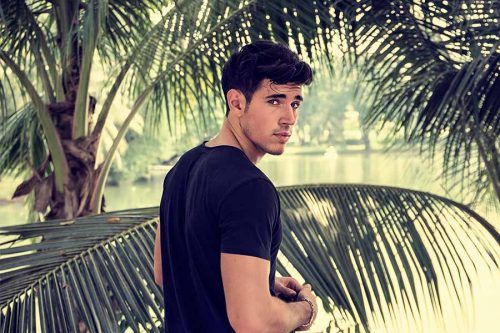 Insightful Guide To Stylish And Hip Medium Haircuts For Men 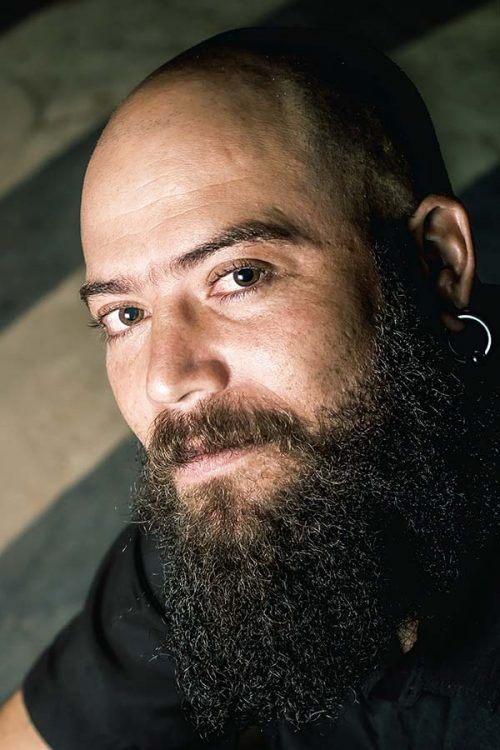 You’ll be surprised, but the Viking head isn’t always about the length, it’s also the character. So, if you’ve decided to pair a buzz cut with a full beard, you’re welcome to do so. Viking beards speak for themselves so there’s no point to prove anything with the help of long hair on the head. Thus, it’s better to grow your beard long instead. 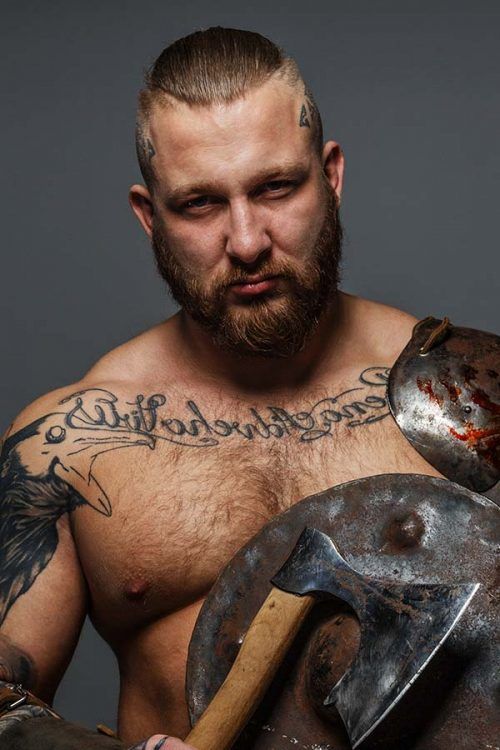 If you did let the hair on your head grow long, try out the slick back undercut. In addition to low maintenance, you get one of the most stylish and edgy Viking haircuts. If you’re after a rather harsh slick back hair look, make the difference between the top hair and sides more striking. In case you need something formal and traditional, just don’t trim the sides too short and don’t leave the top too long. This ability to be adjusted to different occasions and styles makes the slicked back hair style highly versatile.

A: Despite the common belief that Vikings hair was unkempt and filthy, there is evidence that proves the opposite. The warriors had all the necessary tools for proper grooming, which allows us to make the assumption that their hair was neat and tidy both on the head and on the face. 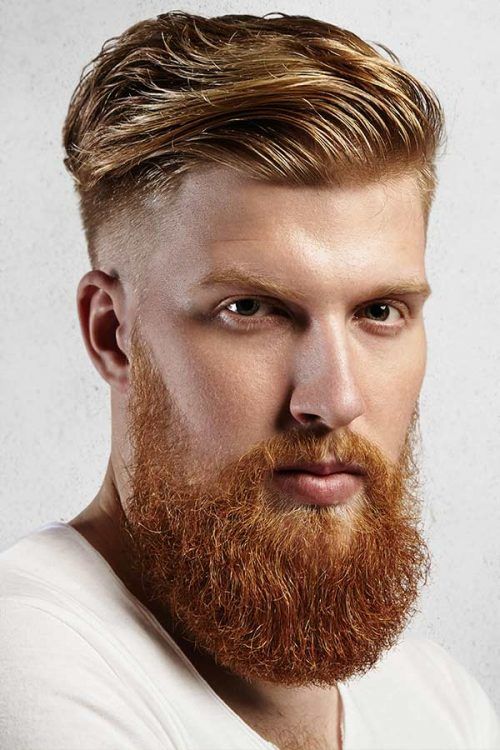 Side swept hairstyles always create a very strong impression, especially when combined with an undercut. If you’re about to get one of these side hairstyles, here’s a good option. Let your thatch grow long to the chin and then ask your barber to shave your back and sides. 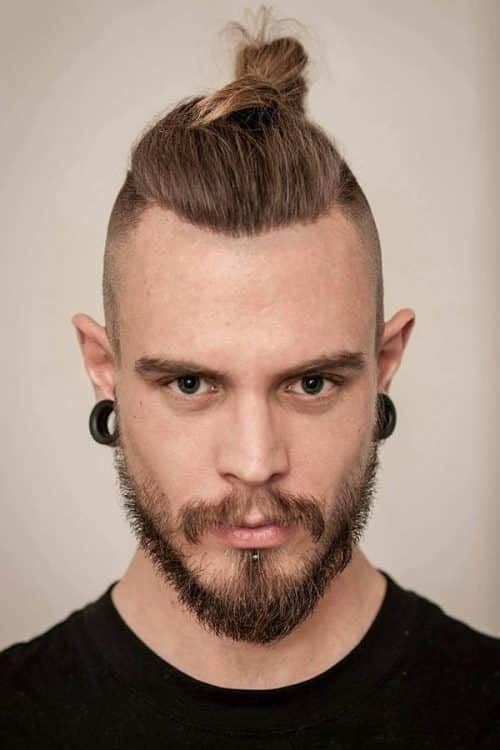 If sometimes the top knot man ties may be the inclination into the feminine side, you can’t say that about the Viking knot. This hairstyle looks totally masculine. For added virility to their top knot men make it voluminous and messy. And, of course, don’t forget about the rugged beard. 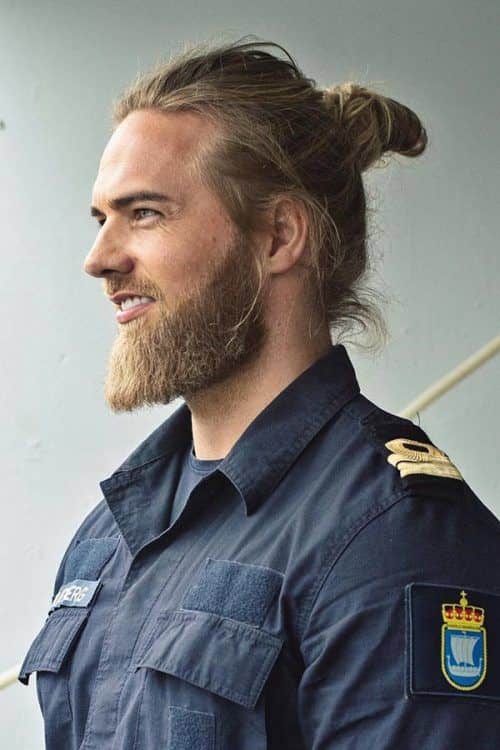 One more great example of the stylish mens long hairstyles is a Viking man bun. First of all, the hair type doesn’t make any difference for this ‘do as it can be equally successfully pulled off by men with straight, wavy or curly locks. Second of all, man buns are so easy to create that you won’t even notice that you tie one every day. For a look that’s particularly Viking, use your hands not a comb to pull your hair back. This will make the bun more messy and dashing. 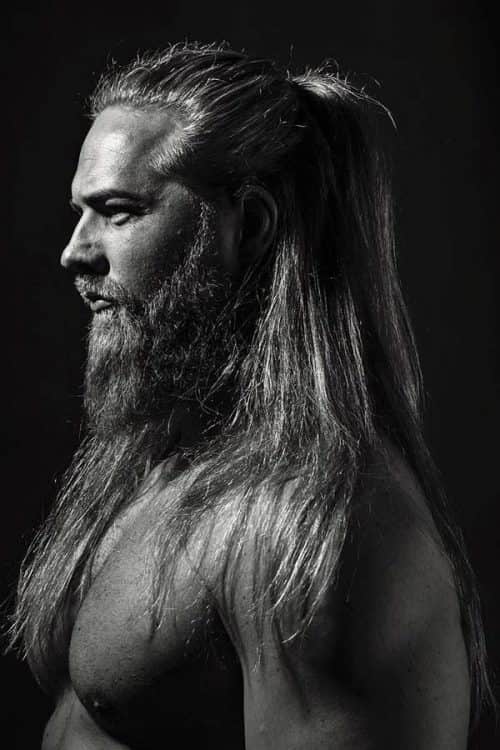 Another good way to show off your luxurious long hair is to pull it into a full or even half ponytail. The latter will still focus on the length while taking the hair away from the face. Ponytail hairstyles combined with thick facial hair create the perfect Viking look.

Q: Why did Vikings have long hair?

A: Similar to many other cultures, long Viking locks were associated with strong and powerful men. Besides, the Nordic climate was extremely severe back then too, so long hair helped the warriors to keep themselves warm. Finally, it was a matter of fashion combined with conformity. The tribe members were supposed to follow the chieftain or king. So, if he sported long hair, then all his subjects and the following generations did too. 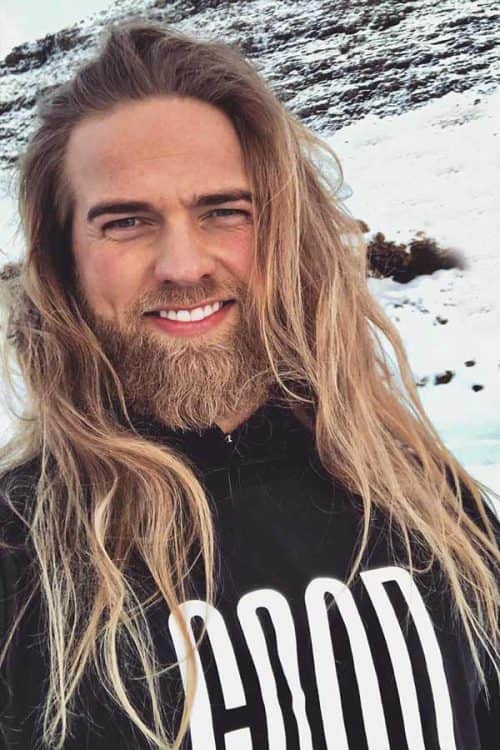 Men with long hair look unbelievably attractive and classy. It isn’t actually necessary for them to tie it at all. Wearing their stately locks loose is the best options for guys with long hair. To emphasize that this is the Viking hairstyle you’re sporting, just give your mane a bit messy and textured look with the help of a styling product, like a sea salt spray. 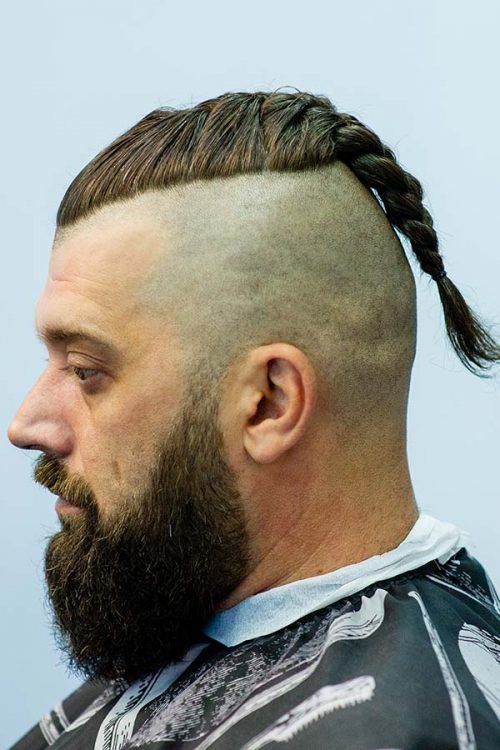 Viking braids won’t make you feel jealous only if you’re sporting them yourself. In Viking braids male hairstyle, you usually create them only with your top hair while the sides and back are given a trim. Great news about the braids for men is that they can be crafted with any hair length. 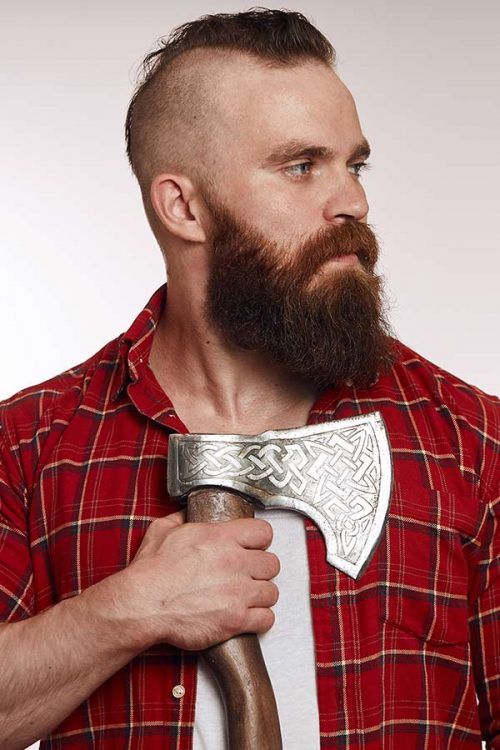 Fohawk is an exclusive chance to achieve a genuine warrior look. Interestingly, you can ace it without shaving your sides. To imitate the fauxhawk, create a braid that goes through the center all the way down your head. Such braid styles are very beneficial for men with long and thick thatch as they help achieve the Viking braids look without any effort. 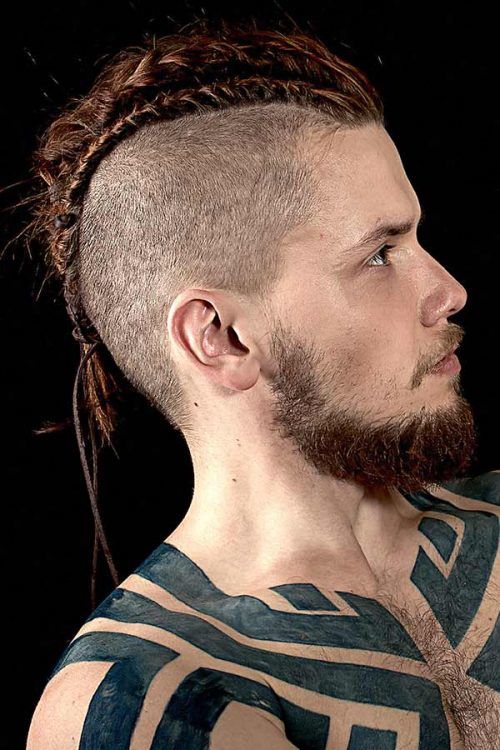 Braided hair is surely on trend right now, thus you have to try this Viking braids without demur. Pull your top hair back and create a single braid with it. Add several extra braids to the rest of the hair. Such braids hairstyles appear absolutely stunning paired with the luxuriant facial hair.

Q: Did the Vikings braid their hair?

A: While they actually did braid their hair, Vikings did not do that as often as we might think. These Nordic warriors used to braid their locks in order to keep them out of their way when fighting and performing a tough job. However, they often cut their hair so that they did not have to braid it, which is known as a tellum or a reverse mullet. 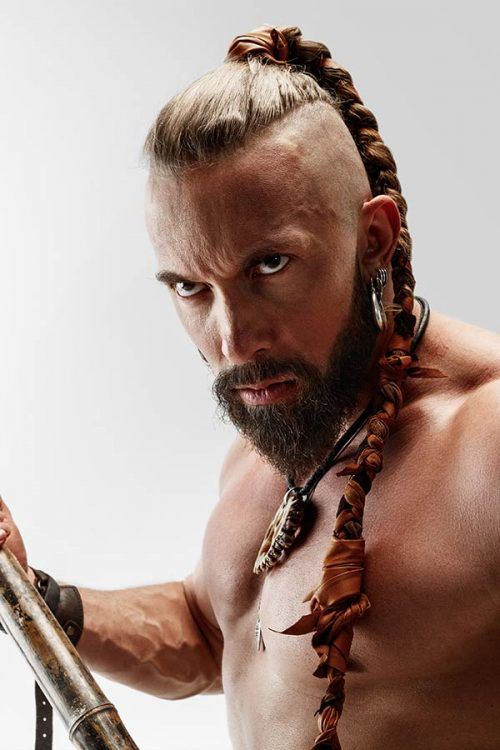 Even if you haven’t seen the TV show, it isn’t an excuse not to give this Vikings haircut a go. The sides are shaved, the top is slicked and braided and the beard is well-trimmed. Nailed it! 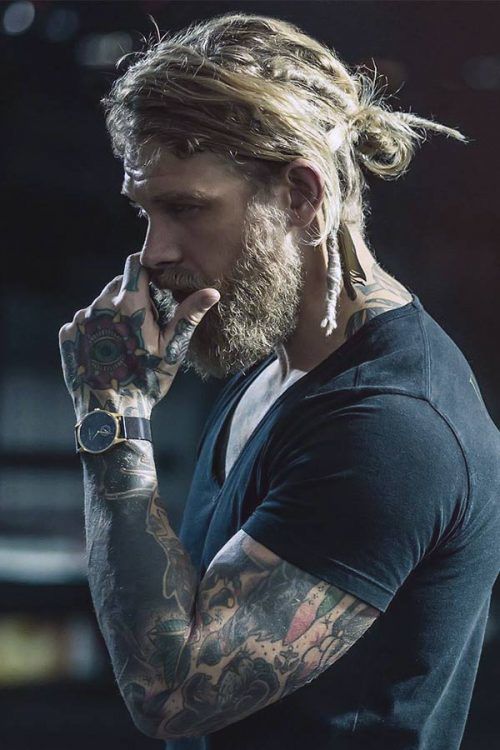 Here’s another Viking hairstyle inspired by the TV show. Rather than braiding your long tresses, harness twisted hair instead and you’re done! 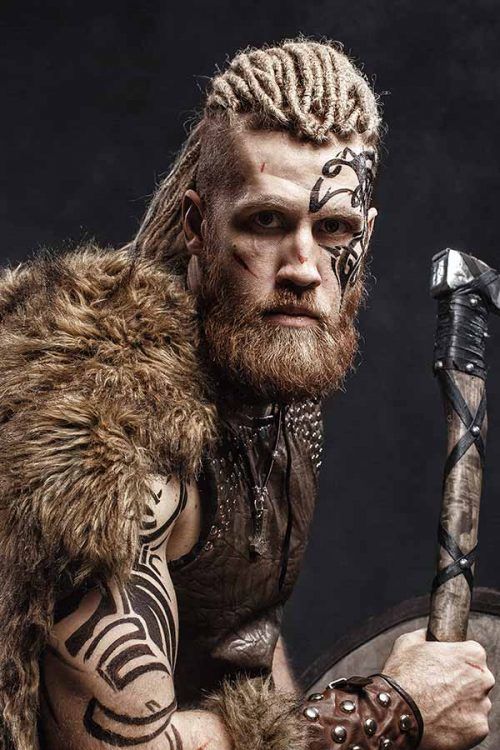 If you’re willing to invest some time and effort into your hairstyle, definitely go with the Viking dreadlocks. If you don’t want to wait until your hair is grown out or the dreads are formed, use some hair extensions. 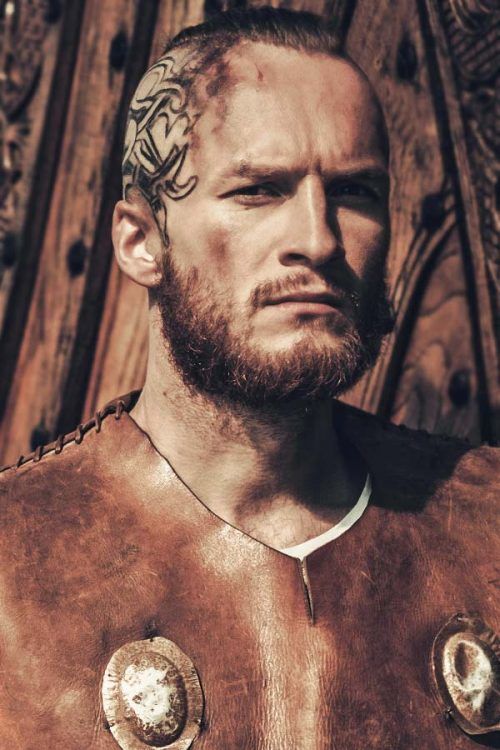 Head tattoo looks incredibly daring, especially with the shaved sides and long top hair. Those who only want to try this ruthless look on without getting a real tattoo can make a temporary one. 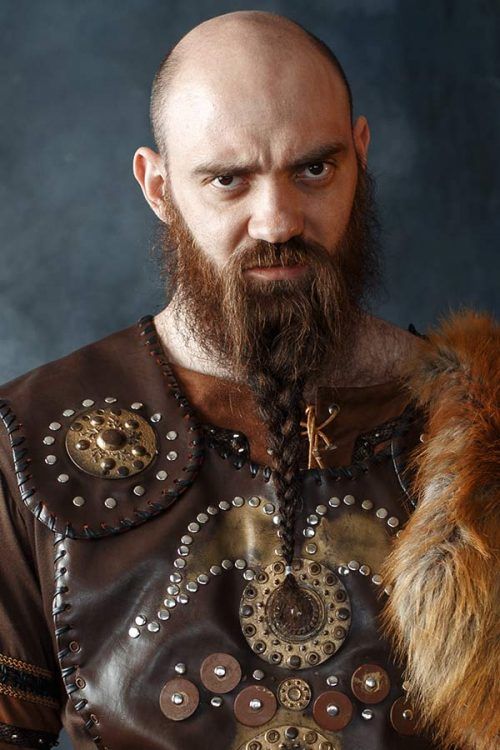 For some reason, you don’t want to plait braids on your head but you’re really after Viking beard styles? Beard braid is a very nice alternative that will help you create the Viking beard look without utilizing your head hair. 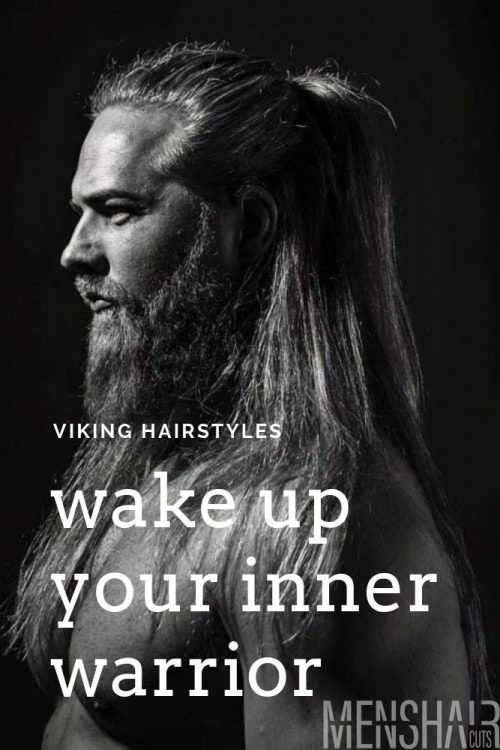 Viking hairstyles can be harnessed not only by those gents who are into the Scandinavian culture or the popular TV show. They’re also admired by the men who just like rough and brutal looks. Whatever hair length or structure you have, there’s always a modern Viking hairstyle to suit your tastes. 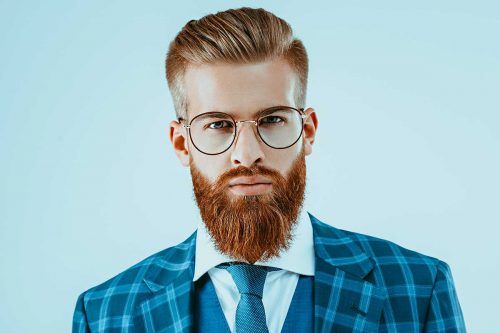 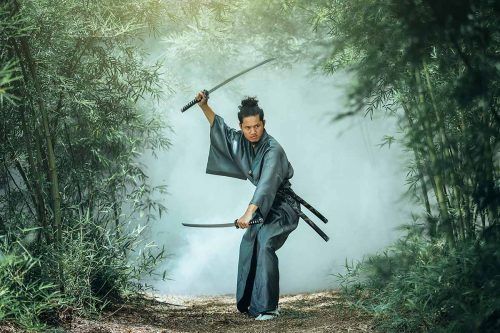 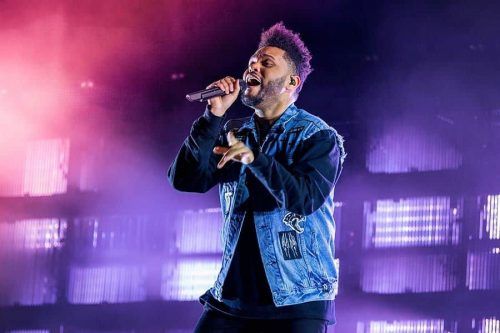 Breaking News: The Mystery Of The Weeknd Hair Style Change Is Solved!